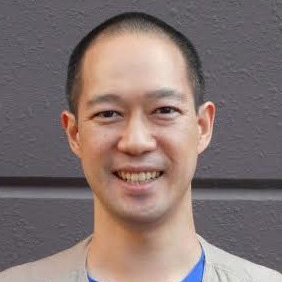 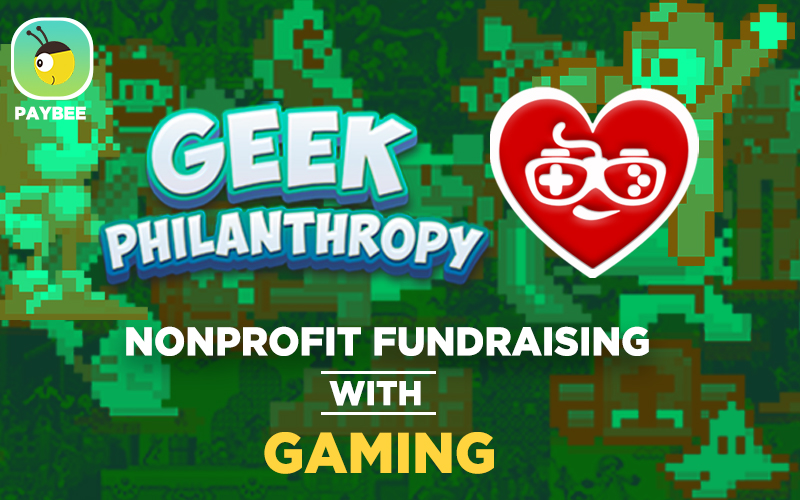 Level Up Your Nonprofit Virtual Fundraisers with “Geek Philanthropy”

When hosting a successful virtual gala, “streaming video games on Twitch” may not be the first fundraising activity you have planned.

But maybe it should be. According to an article from Forbes, philanthropic gamers from around the world are raising tens of millions of dollars for multiple nonprofits and charities just by broadcasting themselves playing popular games — like Pokémon FireRed, Overwatch, and Donkey Kong 64 — and encouraging viewers to donate to a charity.

By employing streaming services such as Twitch along with a reliable fundraising platform like PayBee’s to promote and host the virtual event, “geek philanthropy” has helped raise millions of dollars for causes ranging from cancer research to whale and dolphin conservation.

If you’d like to learn why and how your nonprofit or charity should host an online gaming tournament in your next virtual or hybrid fundraising event, read on. We’re about to help your organization level up to include the popular and lucrative fundraising tactics of “geek philanthropy.”

Why “Charity Streaming” is the Next Logical Step in Fundraising

In many ways, hosting an online gaming tournament at your next virtual fundraising event is simply the latest evolution of traditional fundraising. Maybe you remember watching celebrities and music groups perform on live “telethons” for TV stations like PBS while volunteers answered phones and encouraged you to raise money for charitable causes. These were popular events, especially during Christmas and Easter, and helped raise a lot of money for charities and nonprofit groups.

Today, however, most people get their entertainment from digital livestreaming events they view through computers and smart devices. That means your next fundraiser needs to know how to host a successful gala on these platforms and offer the type of entertainment modern audiences want to experience — like livestream gaming.

Fortunately, virtual fundraising platforms like PayBee and streaming services like Twitch make it easy for you to assemble an amazing online event that will attract hundreds — even thousands — of new supporters, ready to donate to your cause. And with all the popular content available online, it’s simple to discover what type of online gaming tournaments will excite your supporters the most and drive them to donate.

And once you learn the type of online video games your supporters want to see livestreamed at your events, the rewards can be considerable. After all, while the average nonprofit or charity tends to reach out to older philanthropists for financial support, the younger generation can be just as willing to donate generously one you connect with them successfully.

Case in point: on December 21, 2019, 32-year-old streamer Benajamin “DrLup” Lupo raised over $2.3 million for St. Jude Children’s Research Hospital through his 3.6 million Twitch followers and Twitch itself (which contributed $1 million of that total) during a 24 hour livestream video game playing event. During the summer, he held a similar event and raised $920,000 for St. Jude — in just four hours.

How Gamers Raise Money for Charity by Livestreaming Their Gameplay

So, how exactly do gaming fundraisers work? Basically, online gaming fundraisers attract a large audience with an entertaining livestream of gamers playing videogames. These “charity livestreams” can bring in a variety of viewers — gaming enthusiasts, fans of the video game property, supporters of your charity, or just curious visitors. As they watch, your online fundraising platform encourages attendees to donate through donation buttons, on-screen trackers, donation goals, and extra incentives like raffles.

A gaming fundraiser can take many forms. Some are major video game events that last several days. Others are livestreamed competitive tournaments performed by multiple players. There are “marathon” events where gamers play for 24 hours straight in exchange for donations or pledges from viewers who can check on their progress. And then there are “speedrunner” events where gamers play as quickly as possible to compete for world records.

Some gaming fundraisers are so popular that they’ve become regular events that raise millions of dollars every year. Games Done Quick, for instance, is a series of charity video game marathon events that teams up with several charities to raise money. To date, they’ve raised over 31 million dollars in multiple fundraisers thanks to an average attendance of over 3000 people at each event.

While some gaming fundraisers raise money for gaming-related charities, that isn’t a requirement. For example, Games Done Quick has raised money for both Doctors Without Borders and the Prevent Cancer Foundation. Other charity gaming events, like Gaming Community Expo, work to raise money for St. Jude Children’s Research Hospital.

But you don’t have to be a well-known charity to benefit from this type of fundraiser — many local nonprofits have found generous support for their programs within the online gaming community. Nor do you have to produce a multi-day gaming fundraiser to host a successful virtual gaming gala. Some of the most successful gaming fundraisers have been accomplished thanks to the efforts of a single gamer reaching out to an enthusiastic (and supportive) fanbase.

That being said, you do need to take several things into consideration if you’re thinking of hosting a video game fundraiser for your charity or nonprofit. Successful “charity streams” take the efforts of multiple people and require more than just a passionate knowledge of video games.

How You Can Host Your Own Online Gaming Tournament

Each gamer in your group can create and share a fundraising page for your cause with their social media community. The page will then allow the gamer’s friends and followers to donate to your nonprofit or charity, giving your organization access to new supporters and donors you never would have been able to reach otherwise. And since these gamers are already part of your organization, they can talk enthusiastically and intelligently about your mission and why others should support it.

If you don’t already have a link to established gamers, consider reaching out to local gaming communities or gamers on Twitch. Many of these gaming enthusiasts have already staged gaming fundraisers and will be very interested in exercising their video game skills to support your organization. You can also partner with a philanthropic gaming organization willing to sponsor your group or help you build a support network within the “geek philanthropy” community.

Of course, odds are you’re going to have to take an active hand in producing the actual gaming fundraiser. Start by watching some successful online gaming tournament fundraisers to get an idea of how yours might look — and educate yourself on the type of technology you’ll use to host your event.

Aside from learning how to livestream your event, find a reliable online fundraising platform that makes it easy for you to collect donations from attendees and keep records of each transaction. Be mindful that certain platforms take a cut of the money you raise, so make sure the percentage is acceptable.

When building your virtual gaming gala, you’ll need to think of ways to keep your audience’s attention. Remember — this is basically a next generation telethon, so your event may last several hours or even multiple days. And while the gameplay will be a major draw, you can add to the excitement by including guests on the livestream, such as a professional emcee who can encourage visitors to donate.

Set up a donation thermometer to show what your fundraising goal is (just keep the number realistic, especially if this is your first gaming fundraiser!). Offer chat features to let participants interact with each other. Create a raffle campaign to encourage more donations and offer prizes the gaming community will want — like a Nintendo Switch or a copy of the game being live streamed. You’ve got a captive audience, so keep them engaged!

Keep in mind that, like any virtual event, a gaming fundraiser will come with technical issues. As such, it’s a good idea to use a service like PayBee’s that offers a support staff to help you handle any potential glitches and keep your event running smoothly.

Ideally, the gamers participating in your fundraiser will reach out to their followers and get them to attend your event — but don’t stop there. Promote your gaming fundraiser through your own social media networks. Come up with an eye-catching “stream brand” for your online posts that showcases your upcoming event and share it on Twitter, Facebook, YouTube, and Pinterest.

Create an email campaign and offer regular updates on the progress of the online gaming tournament to build excitement. These marketing features are easily accessible on PayBee’s online platform, so take advantage of them!

While gaming fundraisers might seem like an unusual addition to your usual lineup of fundraising activities, in this new age of virtual and hybrid fundraising, it just might be the best revenue stream for your charity or nonprofit organization.

Get to know the interests of the donors and supporters of your community. If you discover many of them enjoy watching gameplay — or are enthusiastic gamers themselves with a connection to the growing gaming community — hosting an online gaming tournament might result in a new fundraising tradition that offers regular revenue for your programs.

As you look into this profitable form of virtual fundraising, stay educated on the online tools and resources available to you. Sign up for a free demo of PayBee’s virtual and hybrid fundraising platform and learn how you can use its features to support your next gaming fundraiser! 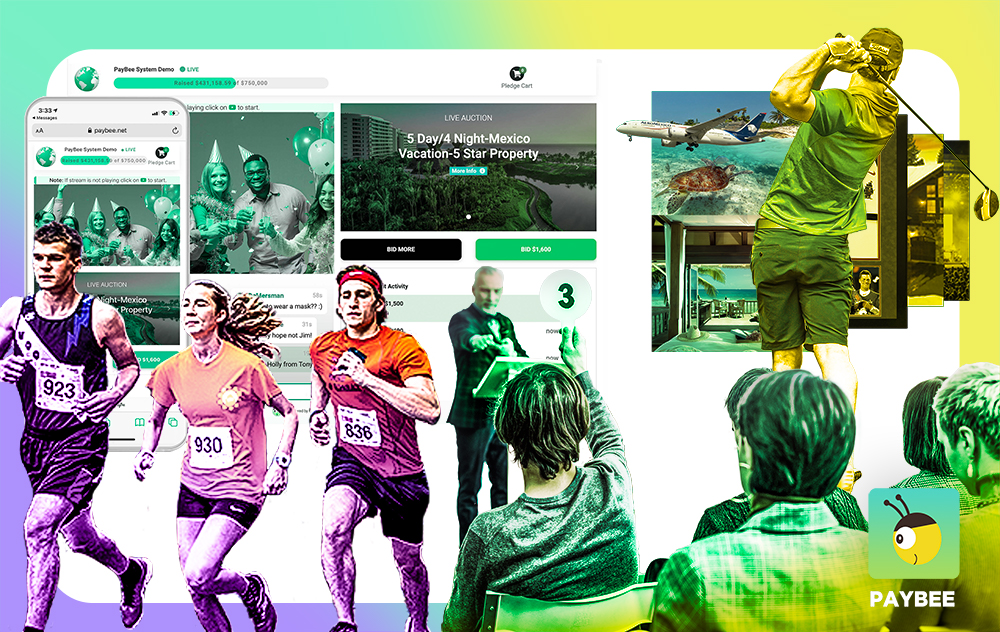 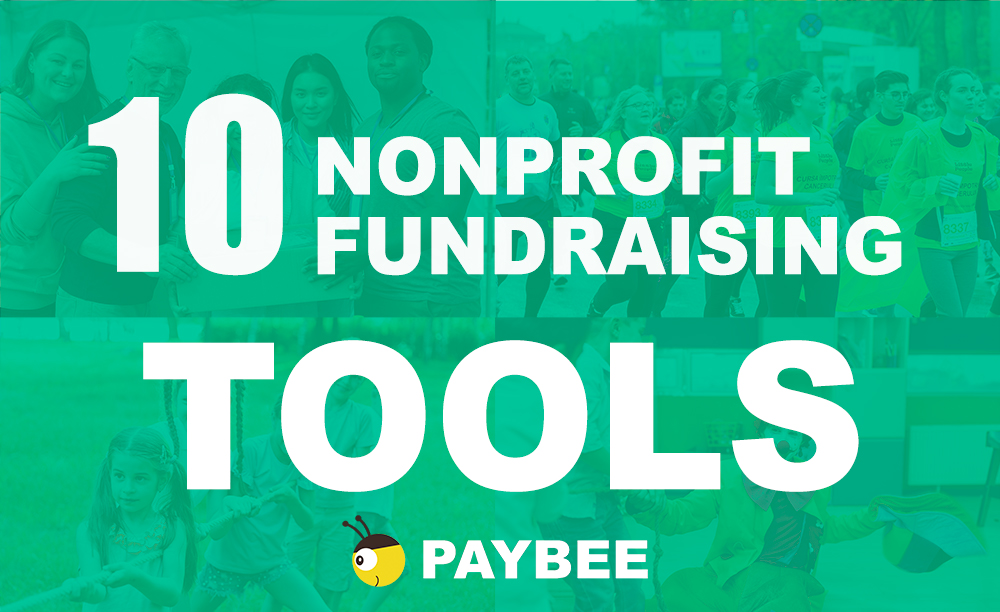 Top 10 Online Tools You Need for Your Nonprofit Fundraising Event

Online fundraising platforms come with plenty of bells and whistles today, but here are 10 online tools you absolutely must have for your next fundraising gala. 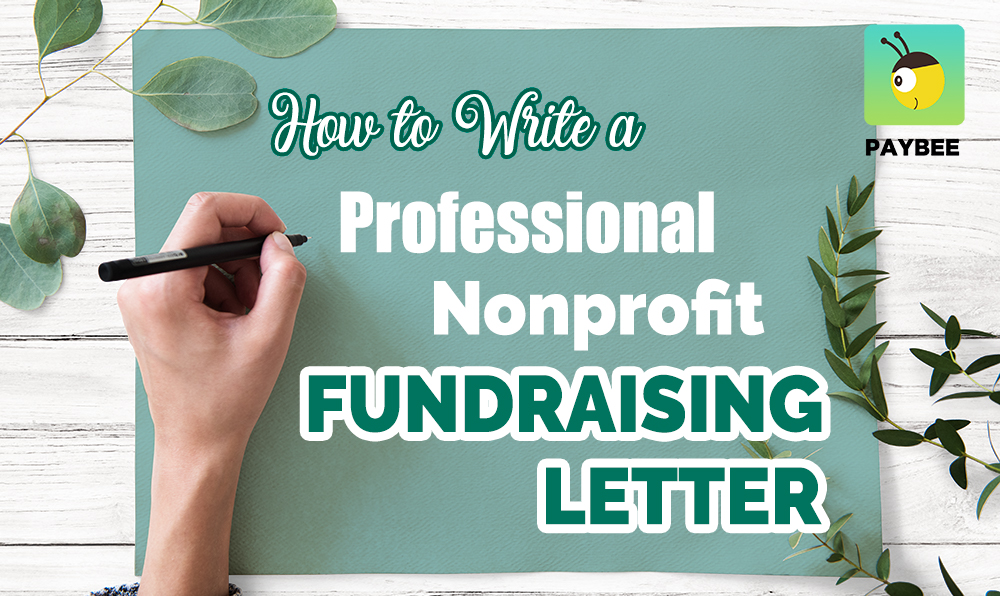 Fundraising letters allow you to not only be professional about your campaign, but to also give potential donors that personal touch from your organization.